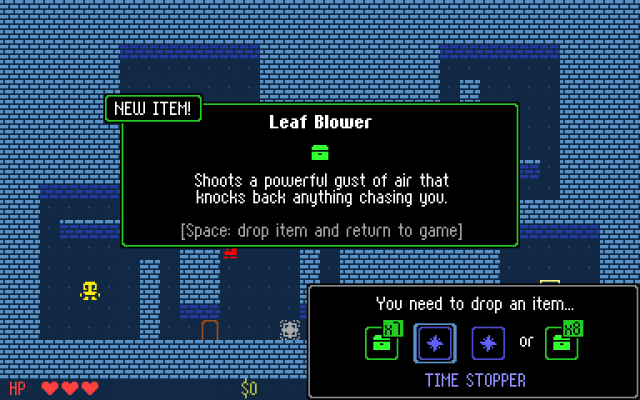 Day 2! After spending most of yesterday getting to grips with the game again, today I started adding some new stuff. By the time I’d stopped working on it last year, it had become a mess of half finished ideas – so my general approach is to simplify as much of the game as possible, and focus on keeping the stuff that’s fun. For example, I’m trying a system where you just have two or three inventory slots. Simpler than a full inventory system, and probably more interesting too.

Mostly what I’ve been doing today is cutting stuff out of the game – I’ve short circuited the level generator to just go back to giving me one floor of a tower at a time, I’m scrapping items and weapons that don’t have enough individual identity to be worth cluttering the game, and I’ve simplified some basic concepts in the game – for example, all the enemies are robots now, which means there’s no longer a class of weapons that’s effective against humans but not robots, or vice versa.

Tomorrow I’m going to get back to level design, so hopefully I’m not too far away from something playable!